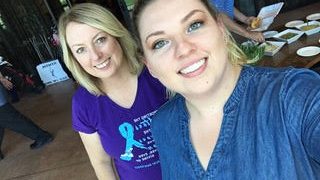 Big trucks with big wheels playing loud music. It’s a big part of Sophia’s memories of her father, John, who died when she was just six years old. “He was so fun,” Sophia said. “I remember sitting in the big spare tires in the back of his truck and going to the park.”

Sophia also recalls the family going to eat Chinese food after she graduated from kindergarten. She incorporates that memory into her life still. 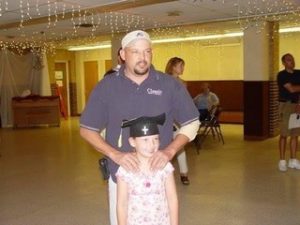 Sophia with her Dad at Kindergarten Graduation

“If I have a good day or a big event, I have to go get Chinese,” she said.

It’s been 18 years since John passed away. The family lived in Denver at the time, but Sophia and her mother, Amy, moved to Albuquerque not long after. It was here that Amy learned about the Children’s Grief Center.

“I sought out help,” Amy said. “I thought we both needed help in coping. She was 7 or 8 when we started going. When I talk about the Grief Center, I always note it has a way of connecting with children where they don’t realize they’re getting help.

“Unlike school, where you feel like you’re the only one, at the Grief Center, you know everyone there had losses. Being in that environment is healing.”

Sophia still remembers many of the activities she participated in during the five years she went to the Grief Center. She recalled the sandboxes where the youth often created scenes depicting their memories, as well as the M&M game, where the colors represented categories and the children answered questions, such as how they were feeling. 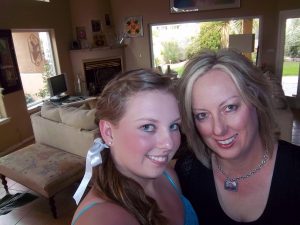 Sophia at 14 and her mom, Amy, before speaking at the Governor’s Ball.

The ability to catch up with others at the Grief Center during the dinner before everyone split into groups by age was one of the things Amy liked best.

“We enjoyed that time,” Amy said. “(The Grief Center) was so positive for us. Sophia loved going. We stopped going when she was 13. She wanted to go at first, but she thought about it and said she was doing OK and other kids needed it more than her.”

“She was on the stage telling her story, and it was phenomenal,” Amy said. “She got a standing ovation.

The Grief Center and time have helped Amy adjust to the loss of her husband. She said the first year after his death was a blur as she worked “nonstop” for the first six months. 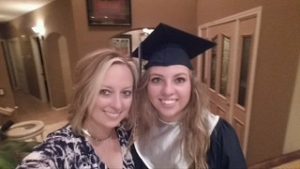 “Working became a coping thing,” Amy said. “Over time, I figured out how to balance work and life.”

In the ensuing years, Amy created a foundation for women with cancer in New Mexico. She now makes sure she has time to enjoy herself away from work and shares that time with her partner, Wade.

Sophia, now 25, graduated from the University of New Mexico with a BS in Biochemistry and Spanish, as well as a BS in Psychology. She loves to travel, is very social, loves music, and will apply to medical school soon.

“Her loss and experience created confidence and caring,” Amy said. “I don’t think it could have come from anywhere else. The Grief Center absolutely impacted Sophia’s success. I will forever support the Grief Center. It helped her and us.”